A number of our Didcot players competed in the Oxfordshire Netball League’s 65th Birthday, celebratory tournament over the weekend.

20 teams entered, who were divided into four sections.

The first round consisted of 4 x 12 minute games, within the team’s allocated section.

Depending on the results of these four matches, the 20 teams were then re-organised into four new sections for round 2.

4 more matches were then played, to determine the overall winners of each section.

The tournament was a lot of fun, in particular round 1’s first match which saw the team pitted against the England Men’s team!

The game against Didcot was the men’s first outing of the tournament. DNC were given a lot of encouragement throughout the match by the teams not competing in their own games, who wanted to see the level of skill that these gentlemen brought to the tournament!

Despite losing this first match, the game was full of laughter from on-court shenanigans and greatly enjoyed because, how many times do we get to say we have played against national level players!!

DNC next faced Adderbury Angels & Demons, which ended with a draw.

The next two matches against The Randoms and Phoenix Kites saw DNC win, so the team placed in the second of four sections, going into round 2.

After lunch, round 2 was tough and the weather really hotted up

. Losses against Wallingford and Vale Vixons were followed by a win against Summertown. The final match against Vale Vikings ended in a loss, but the team were proud to be able to represent our club and were happy with their performance!

The tournament was a great way to round off the 65th year of Oxfordshire netball, plus hopefully it raised lots of money for cancer research too.

Lovely to have support from family and friends who came to watch. Massive “thank you” to Jo, who not only umpired the eight DNC matches, but stepped in to another six matches, when umpires were short. 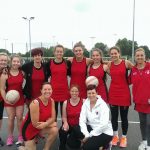 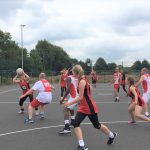 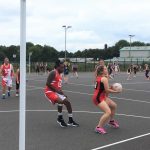 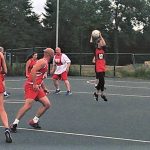 Roll on the next tournament!

A big "thank you" to SMILE!